Here is what I have learned during my journey with breastfeeding, especially this past year.

Breastfeeding.
The most natural unnatural thing.

My history with breastfeeding has not been all rainbows and glitter.
I love the bond and connection it gave me with my babies. But for the actually act of breastfeeding… well I have a love-hate relationship with it.

It all started when I got pregnant at 16. Knowing I was going to place my baby for adoption I didn’t want to do any research about child-birth or breastfeeding, besides talking to doctors, because… well I just couldn’t bear it, it hurt too much. I asked about breastfeeding, I was reassured by several medical “professionals” that if I did not try to breastfeed that my milk would not come in. So being that my son was placed with his parents I never tired. Those “professionals” could not be more wrong, I had 5, FIVE, days of agony, giant, leaky boobs to prove them wrong.

Fast forward to when my husband and I had our son. I gave birth in one of the busiest hospitals around. I never saw the same nurse twice. They wouldn’t even let my husband stay with me at night to help while I recovered from my c-section. So what does all that mean? It means no one helped me learn how to breastfeed. And at night, because I couldn’t get up, the nurses took my baby for the entire night and gave him a bottle! I left the hospital with a 3 day old and bleeding nipples. I cried out in pain every time I tried to feed. My son and I had a very rough start to breastfeeding, and at the age of 4 months he stopped completely when I got pregnant again.
To me, the whole 4 months was a failed attempt at breastfeeding. It never went well or easy.

Now onto my youngest son. It wasn’t that easy. Even though I *knew* what I was doing, it still was not easy. It wasn’t painful, but it still wasn’t easy. He only nursed till 4 months as well. He preferred the bottle. I felt like a failure again. I would comfort myself by saying at least I tried. But that didn’t ease the mom guilt I felt. Mom guilt which was now multiplied by 2 failed attempts. It took me years to come to terms with this and get over it.

My daughter. Third times a charm. Right? Wrong.
I have been breastfeeding my daughter for 1 year and counting.
Like I said, I love the bond. I love the way she reaches up and rests her hand on my face while she feeds.
But I hate the pain. I have had issue after issue with blocked milk ducts. Pain all the time. And whenever it happens, my daughter doesn’t feed well. She bites, she tries to rip off my nipples, she pinches me. I have spent more time crying and getting sick from pain, than enjoying the bonding.
The bad days I get so much anxiety over it that I actually get sick. And bonus. Walking around with painful, almost raw, nipples that my daughter tried to rip off. 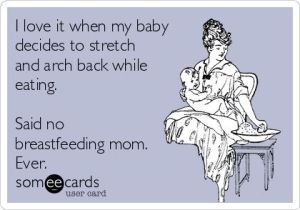 Now can we talk about the fact that my daughter is one and still sleeps like a new-born? I can’t express enough how awesome it is to be the only one getting up with her every couple of hours. Every. Single. Night! Bless my husband, he tries to help, but when she only wants to feed and refuses a bottle, there is not much he can do.
If she would only take a bottle once in a blue moon, that would be such a help!

But then there are the nights it goes well, it doesn’t hurt. Its easy. Its natural. Its peaceful. It’s all worth it.